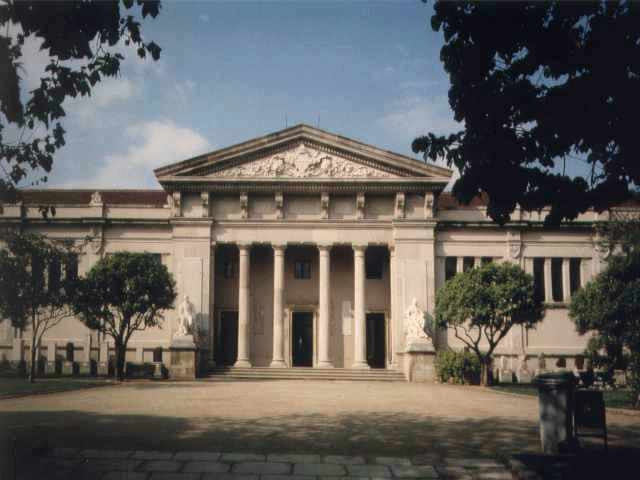 A brief history of the spanish mineralogy

Mineral species and varieties with a name of spanish origin

THE HISTORY OF MUSEUM

The Museo de Geología de Barcelona, was born in 1878, as a legacy from Francisco Martorell i Peña (1822-1878) to the city. He left their collections of natural history and archaeology, his own scientific library, and an amount of 125.000 pesetas dedicate to the foundation of a public museum, with the condition of the town must construct a building in order to save the collections and the library.

The town hall made public that legacy in November, 22 of the year 1878 and they were agree to construct the new building in December 17, of the same year. The Corporación Municipal (The hall responsible) decided to give the name of the donor to the new institution, then the museum had the name of Museo Martorell, the actual Museo de Geología de Barcelona, that in its origin was a museum of natural sciences and archaeology.

The building was projected by the architect Antoni Rovira i Trias and it was built into the Parque de la Ciudadela. The works were finished in 1882, and in the same year it was inaugurated by the major of the city, Mr. Francisco de Paula Rius i Taulet.

The Museum begins with the collections of Don Francisco Martorell but in 1888, after the Exposición Universal de Barcelona were incorporated the collections of natural history showed in it, basically composed of rocks, minerals, fossils, industrial products, forest products and Iberian fauna.

The first director was the brother of Don Francisco, Don Manuel Martorell, who was director from 1822 since his dead in 1890. After his dead his collections were added to the museum. Some other collections arrive to the museum at that time, Don Santiago Ángel Saura (of archaeology), Colegio Antiga (natural history) and a collection of samples of salt, proceeding from Cardona (Barcelona province), that follows today in the museum in its original exhibit case.

This dropping of collections quickly produced a lack of place in the Museum, then the cultural responsible decided to divide the collections. In 1881 the major of the town, then Don Juan Coll i Pujol, founded the Museo Arqueológico, based in the archaeological collections of Don Francisco Martorell.

In the same years the Museo Martorell acquired an important paleontologic collection, proceeding from M. Baron, in París, composed by specimens of classical foreign deposits, which were basic for the paleontological studies at the epoch. Then by one side the Museum began to clear and, by other side it is acquiring new collections specially in natural history.

From 1891 until 1920 the director of the Museum is Don Arturo Bofill i Poch .Bofill was a prestigious naturalist and collector, specialised in malachology. He published a lot of works and collaborate in paleontological works with the Doctor Jaume Almera i Comas , (Founder of the Museo Geológico del Seminario de Barcelona )

In the year 1893, la Comisión Municipal de Bibliotecas, Museos y Exposiciones Artísticas, from which the Museum depends, considered the need to create the Junta Técnica del Museo de Ciencias Naturales y Jardines Zoológico y Botánico, because of they pretend to give to the collections a scientific character to the different institutions. The Junta was composed by personal not related directly to the Town Hall, and related with another institutions working in natural science, Universidad de Barcelona, Escuela de Minas, Real Academia de Ciencias y Artes, Seminario Conciliar, etc...

The Junta Técnica, has its first meeting the December, 21 of the year 1893. It was, in fact few operative in due to the poverty of economical resources received.

At de beginning of the XX century and coinciding with some changes in local politics and thanks to the effort of prestigious people, as Odón de Buen and Norbert Font i Sagué , there are an increasing interest for natural sciences.

The march of 1906 a Junta Municipal Autónoma (Junta Municipal de Ciències Naturals) was created. It take in charge the direction, administration and fomentation of collections and services of natural sciences of Barcelona. The Junta has its first session the September 21 the same year.

The Junta practised its first initiatives. Bofill and Almera were charged to initiate a project consisting in the reproduction of prehistoric animals which must be placed on the Parque de la Ciudadela. Of its project remains, as a testimony the Mammoth (Elephas primigenius), site near the lake of the park. Some other reproductions must follow the Mammuth, but the unexpected dead of Font i Sagué (1910) finishes the project.

It was precisely an idea of Font i Sagué to install in the park at the open air, a collection of big pieces of rocks , The project was initiated with two basaltic columns on the walls of the external vestibule of the Museum, where follows today. furtherly, in the near parts of the garden other rocks were installed. Today a part of the collection remains all along the main walls of the Museum.

Between 1910 and 1916, the Museum is practically directed by Arturo Bofill . In its epoch, a catalogue off the mineralogical collection is published, the expositions (geology and zoology) are reorganised and began the Herbario de Cataluña (botanical collections).

At the same time we must underline the personality of Lluis Marià Vidal i Carreras , related to the Junta as a honorary perpetual vocal Vidal, to his dead, left the collections to the Museum. These were important basically by its paleontological contribution but contains, also, some of the most representative mineralogical samples of the Museum.

After Vidal collection were arriving to the Museum the collections of Real Academia de Ciencias y Artes de Barcelona and Baltasar Serradell, composed specially by Spanish and Catalan samples.

The collection of the Real Academia de Ciencias y Artes de Barcelona signified a very important contribution to the section of mineralogy because it contained at the same time specimens of museographic quality and an excellent representation of localities few or badly existing in the Museum to this moment.

In the epoch, the services of the Junta de Ciencias Naturales de Barcelona were principally, the Museo Martorell and the named Museo de Cataluña (in the building of the actual Museo de Zoología), that occupies a part of the construction, because the lower part was the school of music.

In 1917, the Junta inaugurate new services and published a Guía de Instalaciones y Servicios , which deserved a public congratulation from the Museo Nacional de Ciencias Naturales de Madrid, represented by Don Eduardo Sánchez Pacheco. In the congratulation was underlined the whole cultural institutions organised in Catalonia, especially in natural science.

The period coming from 1916 to 1923, was a good stage for natural sciences, so in the social ambience as in research of the different branches. The Junta published the Anuaris and Memòries, appearing every year (from 1916 to 1922), the journal Treballs del Museu de Ciències Naturals de Barcelona (from 1917 to 1936) that at the beginning was named Musei Barcinoniensis Scientiarum Naturalium Opera, and some other works (courses of the Museum, bibliographies, etc.).

Between 1918 and 1922 the regent (Regent de Palaeontologia y Director del Mapa Geològic de Catalunya) of the Museum was the Doctor Faura i Sans .

From 1917, when the Mancomunitat de Catalunya was formed, the four political divisions of Catalonia (diputaciones) were converted in only one. Then the work of the map became extensive to whole Catalonia and Faura i Sans is charged of its map. The first sheet (Vilafranca del Penedès), with an explanative memory, appeared in 1922.

The Servei del Mapa Geològic de la Mancomunitat de Catalunya had its seat in the Museo Martorell from 1919 to 1923, and the collected material (rocks, minerals, fossils) deposited in it and the bibliography used in the works of the map was given to the Museo de Geología del Seminario Conciliar de Barcelona . At the epoch, the Museo de Geología began to take its actual form. In 1923, due to the political events, the works of the geological map were finished.

In 1924, the section of zoology was translated to the Museo de Cataluña, which was named Museo de Biología.

The following stage it’s marked by the presence of the Doctor Francisco Pardillo Vaquer . Related to the Museum from 1916, he was working in it until 1954, when he was retired. He was its director in two stages, from 1924 to 1930 and between 1934 and 1939. He was an specialist in mineralogy and pioneer of crystallographic studies in Spain. He publishes a lot of works.

From 1941, a new organism, the Instituto Municipal de Ciencias Naturales, was formed and Pardillo, assumed its direction until he was retired.

A good collaborator of Pardillo was Vicenç Soriano Garcés , author of the crystallographic study of most of the specimens of the Museum, he published some works about the crystallography of the silver sulphosalts from Hiendelaencina and about some mineral from the lead mining zone of Tarragona province. His early dead truncate the progression of his studies.

Contemporary to Pardillo, in the Museum Worked the Doctor Maximino San Miguel de la Cámara , who occupied the regency of the Museum from 1917 until he was translated to Madrid in 1942.

Maximino San Miguel was the former of the petrographical and petrological collections of the Museum, and he jointed a very important collection of microscopic preparations of rocks. It was really a pioneer of the modern petrology in Spain.

In 1923 enter at the Junta the Doctor Jaume Marcet Riba , who had been collaborator of geology in the Museum from 1918. Marcet substituted Faura y Sans in the regency of palaeontology and occupied the charge until his dead, in 1963.

A Memory of the year 1956, indicate that the technical staff of the Museo de Geología de Barcelona, are the only two curators: Marcet and San Miguel; there aren’t scholarships or assistants, excepting an honorary scholarship, Mr. Sunyer, who worked and studied in the Museum for a some time. The exiguous budgets and the scarcely staff named for the Instituto Municipal de Ciencias Naturales originate a lack of the activities until the decade of sixteen’s, when a few wider staff could take care of the functions of the Museum.

The end of the direction of the Museum by Alfredo San Miguel coincides with the acquisition, by the town, of the mineralogical collection of joined by Don José Cervelló Bach . The collection of Cervelló was a very important contribution in quantity (more than 3000 specimens) as in quality, Because since the regency of Pardillo, the collections had scarcely growt, with sporadic register of some specimens. Cervelló collection was formed by minerals proceeding from the main world deposits, but it was specially important its contribution to the Catalan and Spanish collections, the register of some meteorites cited and figured in classical works about Spanish meteorites.

Actually The Museum has assigned curators to the sections of palaeontology, mineralogy and petrology, and publishes a journal of scientific character, Treballs del Museu de Geologia de Barcelona) and promotes some services as the petrographic preparations, moults and those referred to the specialised library.